The Tale of FDR's Handwriting

FDR always was acutely aware of his importance in history. As an autograph collector himself, he knew that when he attached his signature to a letter or document, it would likely be preserved. He took great pride in creating a written record of his achievements and there are many thousands of examples of his signature and handwriting in existence.
When his handwriting began to deteriorate, likely due to a hereditary tremor further enhanced by multiple metabolic medical problems, he made an often valiant and concerted effort to minimize the changes. At the end, he simply could not do it.
Here's two interesting examples. The first is his famous "FDR" monogram that he used on more casual correspondence. The first in a July 1941 letter Harold Ickes, referring to "the flu" at the time he was actually in the midst of his anemia that required at least nine transfusions. The second is a November 1944 communication to Adolf Berle. 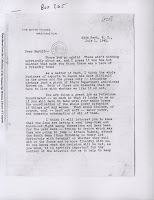 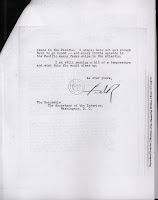 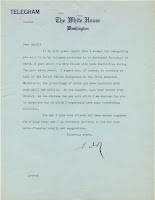 Another great way of comparing FDR's signatures is on his checks. Here's a number of examples documenting the dramtic deterioration in the last year of his life, including the last check he ever signed. The body of the checks are in the hand of Grace Tully.