In some measure, I am publishing this post to illustrate the degree of thought that went into "FDR's Deadly Secret" and to show that our conclusions are not made flippantly are as part of a loosely constructed "conspiracy theory". I also wanted to emphatically answer Dr. Altman's inference in Science Times that we may not have "fact checked".
Our conclusions are based on sound medical reasoning backed by years of intensive research. As David Shribman so eloquently concluded in his review of our book in The Wall Street Journal, more information is better than less!
http://online.wsj.com/article/SB10001424052748703580904574638352930354872.html
So what follows is probably more than you ever wanted to know about the secret medical life of FDR.
While our book devoted considerable space to FDR's May-July 1941 lower GI bleed (and reveals for the first time that there is unequivocal objective evidence for at least nine transfusions), a detailed discussion of the differential diagnosis was felt to be far too technical and speculative to discuss there. This blog is a better forum.
Ever since the analysis of the laboratory reports in the Anna Halsted file at the FDRL revealed the details of this nearly catastrophic event, I have been trying to arrive at a reasonable answer as to its cause. This has led to study in the areas of gastroenterology, urology, radiation oncology and medical history that have been both instructive and fascinating to this neurologist. I have consulted with dozens of highly trained physicians in various disciplines and spent many hours of independent research in an effort to reach the most plausible conclusion.

This post may be too technical for the non-physician, but I think my colleagues in the medical profession will find it fascinating. We have a remarkably large amount of objective laboratory evidence from this incident to work with. Just why Ross McIntire chose to preserve this material and send it to Mrs Roosevelt in 1957 is not entirely clear, but one can hazard a guess.

1) Eleanor Roosevelt was already aware of the specific details (down to the actual lab numbers) of this episode. Whether it was FDR himself or Ross Mcintire that told her is unclear, but her letter to her daughter, as seen in Bernard Asbell's book (the original letter personally examined at the FDRL) is absolute and specific.

2) Perhaps McIntire kept them as a reminder that he almost lost his star patient at the time. As we say in the book, this is the only incident where poor medical follow-up can be documented. All the rest (missing obvious heart failure, the cardiac consult motivated only after the family insisted) are a part of Howard Bruenn's 1970 fairy tale.
3) There is no link apparent link to the deadly secret that one can connect with these lab results. though, as you will see, there may be one indeed.

You will also see that volume and type of medical testing done suggests that the etiology of the problem was probably a mystery even to FDR's physicians at the time.
Now the facts:
FDR's hemoglobin was 13.5 in March 1940, shortly after returning from his second two-week "mystery cruise" aboard the USS Tuscaloosa. At the time, he was out of the public eye for at least two additional weeks, cancelling 3 or 4 press conferences, with a cover story as told by Steve Early to the press that he had "Swamp Fever".
The following 4 photos are from Steve Early's scrapbook at the FDRL. See for yourself! 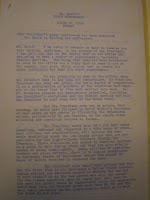 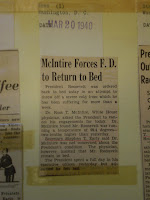 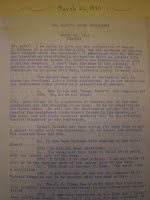 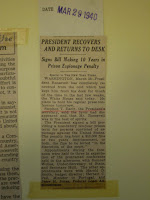 While there are urinalyses seen from this time and the succeeding months, the next hemoglobin we have is 4.5 on March 5 1941, the day after he returned from Staunton Virginia. (I was just in Staunton to do research at the Wilson Library and the director told me that FDR was reported to look pretty bad on that day, understandable considering that he only about a third of his normal blood volume.

The indicies from the May 5th lab report show a chronic process. Since this number apparantly caught them by surprise, it is fair to surmise that the bleeding was slow and not noticed by FDR or his daily attendants- George Adam Fox, his "physical therapist" who was McIntire's right hand man and Arthur Prettyman, his valet, to whom most probably fell the task of helping FDR on and off the john and cleaning up after it.
Existing lab reports reveal the following-

1) normal upper and lower GI contrast studies. Dr. Behrens remarks that there may have been a silght abnormality in the area of the cecum (possibly due to FDR's 1915 appendectomy), but the study was interpreted as normal.

7) At least nine well-document sudden rises in hemoglobin between May and July 1941 for which there is no other reasonable explanation than transfusion.
Here is a compendium of all the lab work from this time.

http://www.scribd.com/doc/20430562/FDR-s-Weight-Chart-and-1941-Bloodwork
All this comes together as a chronic lower GI bleed with a documented loss of 9 grams of hemoglobin in 14 months with ongoing blood loss for two months requiring at least nine transfusions until the patient was apparantly stabilized.
This is beginning to look very much like a classic New England Journal of Medicine CPC, I'll bet you didn't know that there was actually one done in that esteemed journal for the case of Eleanor Roosevelt, after her unexplained death (from undetected miliary tuberculosis). Unlike FDR, medical reports of ER's final illness and autopsy (FDR never had one, its easy to understand why) are completely transparent, authorized to be released by the family and contained, in graphic detail, at the FDRL.
Differential diagnosis:
The most common cause of lower GI bleeding fitting these criteria would be colon cancer. The negative contrast study and the four year survival speaks loudly against this probability, as it does for bowel metastases from melanoma (see 1943 for this one!). Probably next in order of common causes would be diverticuli. This would not be completely excluded with a negative lower GI study, but I am told that the bleeding in this instance is generally paroxysmal and would most probably have been noticed. Remember, the hemoglobin of 4.5, unlike FDR's fatal brain hemorrhage, really did come as a "bolt out of the blue", completely unnoticed until FDR basically collapsed.
One thing this wasn't was hemorrhoids, the cover story. I've yet to find a single physician who doesn't chuckle when presented with the facts and the wholly untenable diagnosis. Even small amounts of bleeding from hemorrhoids (or other rectal pathology such as fissures) is eminently noticable and easily correctable. To lose nine gram of hemoglobin (8 pints of blood) by this route in a little over a year, not to mention in the POTUS, is a virtual impossibility. How this never got challenged until this time is mind-boggling but, of course, how a cosmetically significant "brown blob" over FDR's left eye could disappear without mention in two years is equally remarkable.
There aren't really too many other common causes, so this takes us into the "zebras".
Here is my best (highly educated) guess: radiation bowel disease. This comes from studying the history of the treatment of prostate cancer as best summarized in a wonderful May 2002 article by Samuel R. Denmeade and John T. Isaacs in Nature Reviews. Cancer (also remember that FDR's radiologist, Charles F. Behrens, literally "wrote the book" on the effects of radiation on the body).
http://www.scribd.com/doc/25010145/Prostate
In 1941, Charles Huggins and Clarence Hodges published that prostatic cancer is influenced by androgenic (male hormonal) activity, using the level of an enzyme in the blood, acid phosphatase, as an objective measure. In the same year, Huggins’ classic paper described the effective use of surgical and/or chemical castration with the administration of oral estrogen. This was the first systematic approach to the treatment of Prostate cancer and earning Huggins a Nobel Prize in 1966.

Prior to Huggins’ seminal work, brachytherapy, the surgical implantation of radium into prostate through the perineum (the area between the base of the penis and rectum), bladder or rectum was the treatment of choice. It was uncomfortable and technically difficult and rapidly fell out of favor after hormonal therapy was introduced. Prostatectomy was used mostly as a palliative measure until its technique was improved by Terrence Millin in 1945.
Though obviously speculative, the timeline of the advances in medical and surgical treatment at the time of Roosevelt’s illness fits quite well. One of Roosevelt’s frequent prolonged absences from public view, such as the "mystery cruise" or the “swamp fever” that followed would have sufficed to perform and recover from the relatively minor surgical procedure of radium implantation. Likewise, the lower gastrointestinal bleed that resulted in a loss of two-thirds of FDR’s blood between March 1940 and May 1941 would be explained by the well-recognized complication of radiation bowel disease, as would the laboratory evidence consistent with a subsequent radiation nephritis.
This also explains the well-documented presence of urologist William Calhoun Stirling, who was on the scene according to Walter Trohan and Stirling’s soon-to-be estranged daughter, at least as early as 1942. Stirling would have overseen any hormonal therapy and the tentative surgical procedure referred to in Trohan’s important 1975 book “Political Animals”. The recommended procedure could easily have been an orchiectomy. (By the way, Trohan’s 1975 memoir has been been almost completely overlooked by scholars, probably since it is not indexed, to the point that even the incredibly comprehensive archive at the FDRL didn’t have a copy (they do now, courtesy of yours truly). It is an important resource and a unique and critical look into FDR like no other).
My co-author, a non-physician, cringed at the prospect of even mentioning the possiblity of removing FDR's testicles, but that's the stark reality of real medicine. If FDR thought that a cutting edge procedure would prolong his ability to remain in power, he probably would have done it. The whole prostate scenario also gives us some insight into FDR's ability to perform sexually. He was sexually active (probably exclusively with Missy until her stroke) and here is the evidence (note another of the thirty or so aliases)!

For the uninitiated, "motile organisms" are sperm.
In keeping with the highly confidential and sensitive nature of any treatment for prostatic disease, there is no laboratory evidence of acid phosphates levels but this surely would have been available to Mcintire’s board of consulting physicians. There is no reason whatsoever to believe that a competent urologist such as Stirling would not have employed the most advanced measures to treat the world’s most important patient. Even the anticipated operation allegedly described in 1945 by Eleanor to Veronica Lake correlates well with the onset of the newly described advances in surgical prostatectomy.
There's a lot to digest here, but I'm glad for the opportunity to get it into cyberspace. I remain intensely interested in communicating with any physician who might be able to offer additional insight into the etiology of this event, since, despite the educated speculation above, the actual reason for the problem has yet to be determined with reasonable medical certainty.
Thanks.
Posted by Steven Lomazow M.D. at 7:13 PM