Two photographs I recently purchased on eBay spurred my renewed interest in finding the date that FDR's melanoma was first operated upon.

According to Dr. Ruben Oropeza, Dr. George Packs's closest protegee and an exceedingly valuable source of information, Pack was following FDR for a "Hutchinson's Melanotic Freckle" for ten years prior to his death and personally performed two operations on FDR, the first being a local excision, and the second, a much later "open and close" laparotomy with Frank Lahey and Isodore Ravdin.

The photos below are entirely consistent with that scenario. The first was taken on January 30th 1935 and shows only the scar that had been seen on photos for at least twenty years and probably comes from the childhood incident described by Geoffrey Ward that occurred in early childhood.

The second photo, taken 14 months later is dramatically different, with an entirely new scar in the eyebrow directly below the lesion. Remember, any notion of a malignancy by the public and FDR's political career is over. This dates back prior to the second term! Quite clearly the lesion was cosmetically removed beginning in mid to late 1940 (see the cover of the book that has a photo from mid-August 1940). By Pearl Harbor it was gone, with absolutely no other explanation other than staged surgical removal. 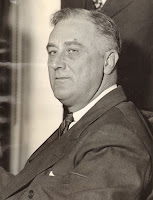 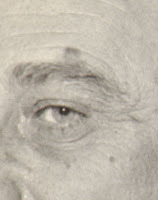 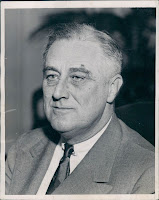 Pretty impressive, huh?
I'll be shortly off to the FDRL yet again to comb through all of the 1935 photographs and FDR's daily schedule to try to determine with greater accuracy when the first operation took place. Obviously, more to follow.
FDR's battle with his health was sooooooooooo different than has been portrayed and had a tangible and previously unappreciated effect on many of his political decisions.
The paperback edition of our book is to released in two weeks. My paper in NEUROLOGY on FDR's epilepsy will appear on February 15th (I'll post a link to it on the blog after it is released).
Season's Greetings to all.
SL
Posted by Steven Lomazow M.D. at 9:11 AM