August 16th 1940 is photography day at the White House. The upcoming campaign for an unprecedented third term is approaching and recent pictures of the candidate are in order.  As with all Roosevelt performances, the set is impeccably staged and the subject prepared in the most flattering light. Just prior to the daily bedroom  breakfast,  Ross  McIntire, as he had done daily from almost a year, washes FDR’s chronically inflamed left maxillary and frontal sinuses with a solution containing cocaine, the most widely employed anesthetic  and blood vessel  constricting agent of the time.  As the usual inner-circle of Harry Hopkins, Steve Early, Missy LeHand  and Chief of staff “Pa” Watson pop in and out, a barber trims his hair and George Fox applies the usual makeup, today with extra special attention to the area over his left eye.  Arthur Prettyman, US Navy chief petty officer, retired, the presidential  valet,  brings out  a light blue seersucker suit and plaid tie. He has been on the job for a year, ever since his predecessor, Irwin MacDuffie was dismissed, in typical Roosevelt fashion, by someone other than himself, in this case Eleanor, after being intoxicated on the job and leaving the President temporarily unattended.
"Morning Pa, what’s on the schedule today?"
"Busy day, Boss, press conference at eleven, lunch with (Naval Secretary) Charlie Edison and a cabinet meeting at two."
After FDR has read his daily newspapers and all the cosmetics of taken care of, a little after 9 Attorney General Jackson and Treasury Secretary Morganthau are ushered in to to give a briefing.  At a quarter to eleven , Prettyman wheels him down to the Oval Office, where he is met by Steve Early who chimes the customary  “all in” and the show begins. The main topic of the day is an announcement that the United States had engaged with the United Kingdom to acquire land for military bases in the Western Hemisphere. No mention is made regarding the transfer to destroyers from the US to the UK. It will be a few months until FDR and Churchill meet for the first time on the Tuscaloosa to iron out the details of Lend Lease.
Immediately after the press conference, a series of photographers from Washington’s finest photo studios, including Hessler,  Underwood and Harris and Ewing, are afforded an opportunity to create a portrait. Control of the images is airtight since 1936, after an objectionable caption appeared in the newspapers on an unflattering  snapshot.
“Make me look good boys, there’s an election coming up you know!”
One of today’s color close-up, by Otto Hagel, will appear on a full page in the October issue of Fortune, alongside that of his Republican opponent, Wendell Willkie.  Another, a shot taken by Hessler Studios, will featured on the cover of the photogravure sections of various newspapers, including the October 13th issue of the Des Moines Sunday Register. 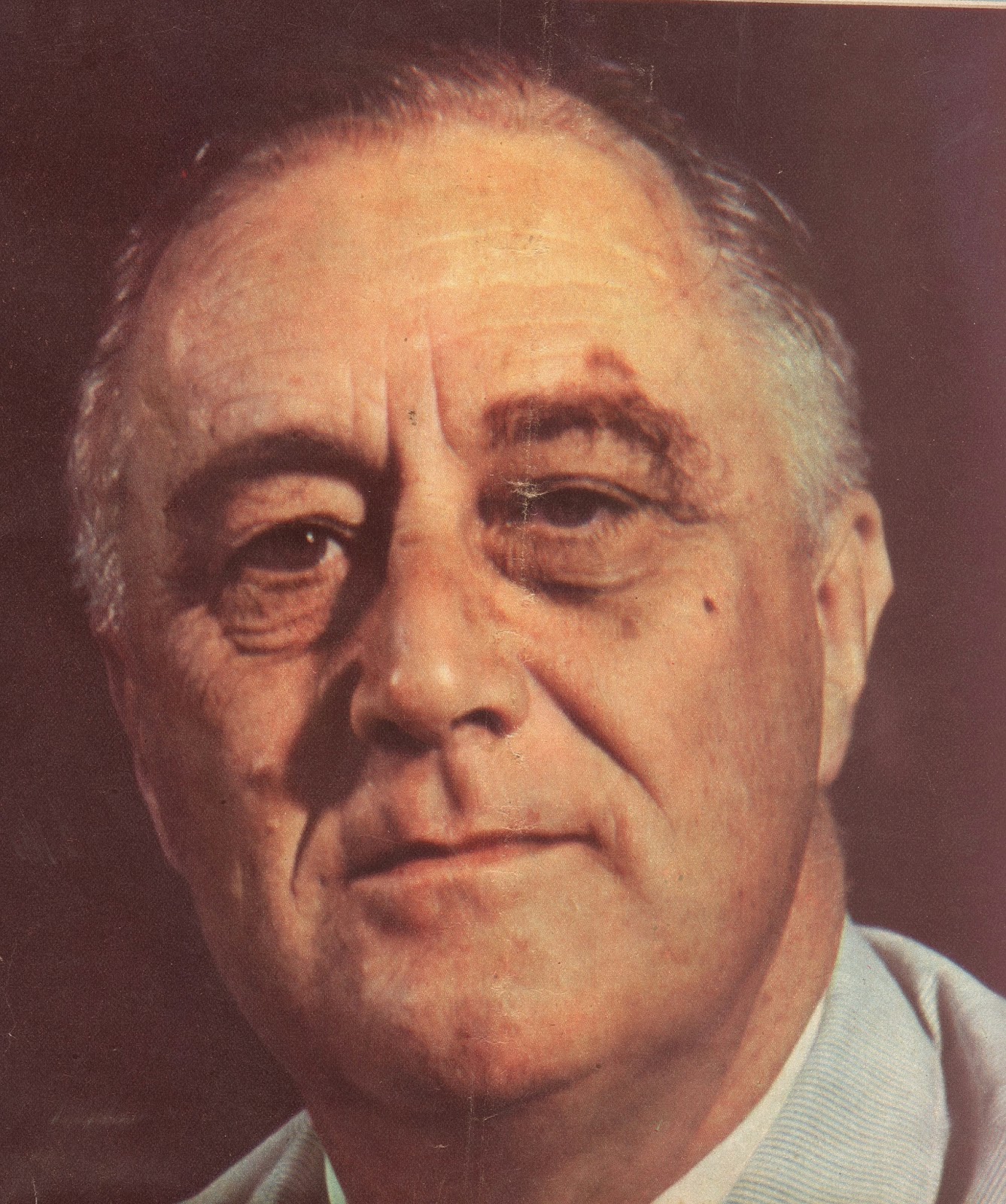 Little does the president realize this day that the images being created to afford him four more years in the position he so covets, will also provide a lasting record of the secret he was so desperately trying to hide.
In their June 10th issue, Henry Luce’s Time Magazine had featured a cover photo of the bow-tied leader in front of a bank of microphones, and in a highly supportive and laudatory article wrote eloquently of the mystery of his persona:
“Although he was in his eighth year as President, although he had moved, worked, eaten, laughed, exorted, prayed in the intensest glare of public scrutiny; although his every facial grimace, the tone of his voice, each mannerism, the dark mole over his left eyebrow, the mole on his right cheek- although all of these were public property, intimate to every U.S. citizen, still there was no man in the U.S. who could answer the question: Who is Franklin Roosevelt?”
In November, Roosevelt received his mandate to lead America for another four years. Another picture from the August  16th photo session, simply captioned “The Winner” adorned the cover of the November 18th issue of Life, and all was ostensibly well. But in reality something had changed. The “dark mole” over the newly re-elected president’s left eye had lost much of its deep brown pigment.  By the time of the “Arsenal of Democracy” speech on December 27th, it was mere a shadow of its former self; by the fateful day of December 7th 1941, it was, for all intents and purposes, gone, never to be seen or spoke of again.
No one outside the president’s inner circle paid much attention to its disappearance, but, in fact, great effort had been made to conceal and deflect attention from it, for the large deep brown spot seen in a video made by the Navy aboard the Tuscaloosa in February, had undergone changes that could only be attributable to surgical removal.
The trick, of course, was to remove it in stages to avoid any notice. For a few days after each procedure, while the area was healing, there could be no close-up photographs of the President. The surgical technique used was a combination of electrical cauterization and curettage (scraping).  Radiation was a consideration but not feasible since it inevitably would have brought about the loss of the entire eyebrow, and most probably the scalp hair, as well as damaging the eye itself. One particular photo from the August 16th session, a large proof image never intended to be released to the public, clearly reveals that the process had begun. Sparse hairs are combed over a new scar in the base of the eyebrow. Pigmentation in the upper eyelid known as satellite lesions, which had subtly but noticeably increased in size between January 1939 and July 1940 had now been replaced by a small but discreet diagonal surgical scar. All this was well within the capabilities and expertise of a highly skilled eye, ear, nose and throat surgeon, someone who could follow him on a daily basis to soothe the pain and swelling associated with the procedure, Ross McIntire.
It is unclear just when the lesion that first appeared in 1921 and slowly and ominously darkened and expanded from 1933, was diagnosed as what today is called melanoma, then referred to incorrectly as melanotic sarcoma.  In the twenties, as an important part of his rehabilitation from Polio, FDR had make a point of getting as much sun as possible, in tropical climates. In the thirties, he was often was out of public view for days at a time for various ailments, including “grippe”, “influenza” and, most interestingly , a “sty” in his left eye in early 1936. A photograph at this time in LIFE stated that he had “avoiding photographers”.  Indeed he was! 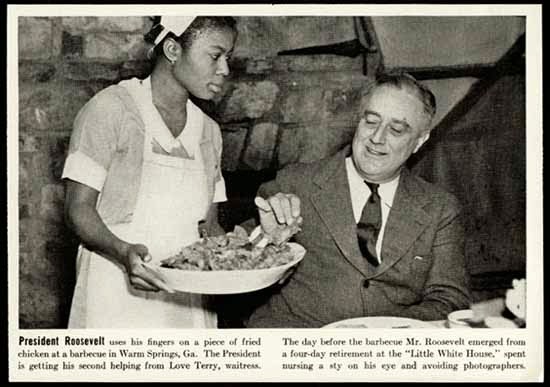 The White House usher’s diary reveals that beginning in early 1939 and continuing until his death, the President’s late afternoon visits to the doctor’s office accelerated to nearly a daily frequency. It is unlikely that this was brought about by a sudden worsening of his “sinus” condition.
What is clear about melanotic sarcoma is that the contemporary mainstream medical literature was concordant about the dire prognosis associated with it. A 1935 article in the highly respected Lancet opined:
“it is customary to speak of melanotic sarcoma as the most malignant of all tumours (emphasis added). It is certainly not the most rapidly fatal. The average duration of a case… is about three years, and up to within a few months of the end the patient remains free from pain and able to get about.”
An eerily accurate 1932 article by H.J. Farrell of the Mayo Clinic, an esteemed institution well respected by FDR, where stomach surgery was performed on both Roosevelt’s son James and his close associate Harry Hopkins, states:
“In spite of the high degree of malignancy, and the rapid onset of death following dissemination of metastatic growths , some persons seem to possess unusual resistance to invasion of the internal organs by these growths. It is probable that metastasis already has taken place at the time of excision of the primary growth (emphasis added), but many years elapse before death occurs from metastasis… The interval between time of excision of the primary growth and demonstrable evidence of metastasis  varied from five to twelve years…. giving a very guarded prognosis in all cases when one is dealing with melanoma.”
“The liver was the internal organ most commonly invaded by metastatic growth;  invasion of the lungs was second… and the brain third. In most cases, there was metastasis to all organs, but before death the patient most frequently presented symptoms referable to the aforementioned organs.”
With present day technique of sentinel node biopsy and the advanced technologies of positron emission (PET) and Magnetic Resonance (MRI) scanning, early detection has been markedly improved, but the prognosis in advanced cases and the time to onset of symptomatic metastases is no better than seventy years ago.