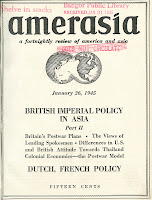 In early 1945, Amerasia Magazine published the title article above. It was a top secret document that had been purloined and leaked, most probably by John Stuart Service.

The FBI then raided the Amerasia offices and found a huge cache of top secret material. Unfortunately, the case against Service was botched and he never came to appropriate justice. In fact, he was reinstated and later wrote extensively in his own defense.

The notorious Joseph McCarthy used the Amerasia leak in his red-baiting rantings in the early 1950's.

A lot different than the current environment. The Amerasia leaks were quite similar in importance to those recently found on Wikileaks. Perhaps we've learned our lesson. Perhaps not!
Posted by Steven Lomazow M.D. at 3:19 PM