The Sick Man at Yalta

My article on the historical implications of FDR's health at Yalta and afterwards is presently on History News Network.

Another Graphic and Important Report of Roosevelt's Seizures

I've been going through my files from my trip to the Herbert Hoover Library in Iowa where I went to peruse the Walter Trohan papers. I have already shared a number of the documents with you but this one, for some reason escaped. When I saw it again today, its importance became quite evident.

The players:
1) The Colonel- Robert McCormick, publisher of the Chicago Tribune , a notably anti-Roosevelt yet quite credible newspaper.

3) Walter- Walter Trohan, long-standing White House reporter for the Tribune and the source of many unique and credible accounts of Roosevelt's behavior and health. Highly suggested reading- his 1975 memoir "Political Animals".

What you have just read is a reliable account of FDR's daughter describing her father's seizures. There is one glaring error, they began months before he ran the fourth time, not the third, nonetheless dramatic. As previously written, these events were interpreted as "little strokes" or "burstings" by those outside Roosevelt's very inner circle (Ross McIntire, Howard Bruenn, "Pa" Watson, Harry Hopkins and most probably a number of other physicians who treated him). They were quite clearly what neurologists (as I am) would diagnose as complex partial seizures.

The implications are obvious (see the Dwyer memorandum on this blog for yet another graphic report)
Posted by Steven Lomazow M.D. at 3:38 PM 1 comment:

The above note was obtained on my recent trip to the Cary Grayson papers at the Woodrow Wilson Birthplace in Staunton. When I came across a file of letters of condolence to Gertude Grayson upon the death of her husband from lymphoma, I looked for and found this one from Lucy (Mercer) Rutherfurd.

Since FDR and Grayson were both very tight-lipped we will never know the the true extent of their relationship but there is much room for educated speculation.

It is highly probable that the two men were extremely close and that Grayson called most of the shots medically for FDR until his own death in 1938. It is no coincidence that Ross McIntire was not promoted until shortly after Grayson's death.

There is absolute evidence in the Grayson papers that not only McIntire was chosen by Grayson, but also fellow Virginian Edmund "Pa" Watson. The other important individual in FDR's life for whom CTG was responsible was George Adam Fox, the medical aide who functioned in the same capacity for Woodrow Wilson.

Grayson was undoubtedly aware of FDR's affair with Lucy and likely facilitated her presence at the two inaugurals he chaired. Interestingly, when Grayson needed to rest up for his 1934 surgery at the Mayo Clinic (where both Hopkins and FDR son James were operated as well) (Mayo was the FDR and company clinic of choice until Frank Lahey came on the scene), he chose to go to stay at Hobcaw Barony, the estate of his old friend Bernard Baruch. It is likely no coincidence that in April 1944 when FDR need a similar rest and being too sick to fly to Guantanamo (the plans were active until at least April 30th), he chose Hobcaw as an alternative.
Posted by Steven Lomazow M.D. at 12:32 PM 1 comment:

The Probable Truth of the Lucy Mercer Affair

Here's a letter found in the Westbrook Pegler file at the Herbert Hoover Library. It lays out what is probably the true story of how Eleanor learned about Lucy Mercer and how she reacted ab when she she did.
Even a very prominent FDR historian who has written about the affair has told me privately that he believes this version to be the truth. For your reading pleasure: 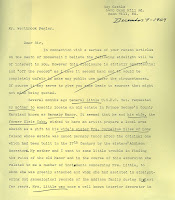 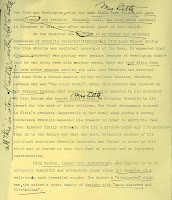 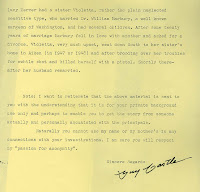