The Earliest Picture of FDR's Melanoma- 1920 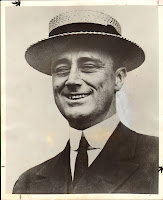 I just bought this picture on ebay. It is undoubtedly from 1920 and clearly shows the pigmented lesion over FDR's left eye. It is the earliest it can be seen (and believe you me I've looked at thousands of photos). The earliest prior photo is from TIME Magazine in 1923.

As you can see it is quite benign appearing at this time and far less noticeable than the mole on his opposite cheek. Twenty-five years later it killed him, from a bleed into a brain metastasis.
Posted by Steven Lomazow M.D. at 12:28 PM 2 comments:

The epilepsy of Franklin Delano Roosevelt

My paper in Neurology, the official publication of the American Academy of Neurology, appeared in yesterday's issue. I look forward to the comments of my colleagues.

FDR's Many episodes of "the flu" and William Bradley Coley.

I am presently involved in writing a biography of the great cancer fighter, George. T Pack, the founder and for many years the head of the gastric and mixed tumor service at Memorial Hospital (now Sloan Kettering) in New York City.

Among his many accomplishments Pack was known as "Mr. Melanoma" for his treatment of this dermatological killer with surgery, radiation and other modalities such as immunotherapy.

One method of immunotherapy used to fight melanoma in FDR's time by Pack were "vaccines" devised in the 1890's by bone surgeon Willam Bradley Coley. This included such proteinaceous mixtures as denatured Rabies virus. The quality of the therapy was judged by the amount of fever generated in reaction to the dosing.

Of course my one track mind went immediately to FDR as I realized the potential impact of such a treatment upon him.

Even, "pre-Lomazow/Fettmann" loyalists, that remain regrettably plentiful, will concede that FDR was always sick. The "official" reasons were everything from "swamp fever" "intestinal flu" (the alleged reason for losing two thirds of his blood and having none transfusions in 1941!) the the old favorite "the Grippe". The latter was the excuseFDR gave Churchill in 1944 to beg off from a summit intended to be held in Bermuda in April 1944 to plan something called Overlord. We all know that at the very least he had severe congestive heart failure at the time ( though the telegram went out over a week prior to Howard Bruenn allegedly seeing hime for the first time!)

Yet this does not explain the the countless episodes of presidential absences from view for days to weeks after 1935 or so.

As everything else a highly educated guess: early immunotherapy for melanoma probably accounted for at least a few of these strange febrile episodes.

When I told Ruben Oropeza, Dr. Pack's confidante (a la Daisy Suckley for FDR) about the removal of the melanoma in 1940, he immediately grasped why it could not be totally removed. As a man that removed thousands of melanomas over fifty years he aptly noted that, at the very least, the eyebrow would have to have been removed and "thrown in the bucket" along with the remainder of FDR's political career.

FDR loved being Preseident more than life itself and, in the end, he payed the price to stay in office until the day he died. There are still many very learned skeptics about everything we have been preaching but, in time, the world will appreciate the truth about this remarkable man and not the fairy tale that be and his physicians concocted.
Posted by Steven Lomazow M.D. at 6:24 PM 1 comment: 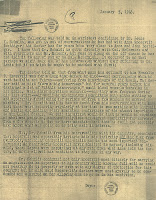 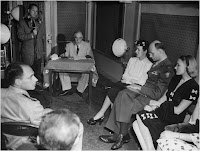 This photo is interesting for a number of reasons. It was taken near San Diego, in FDR's private railroad car, the Ferdinand Magellan, on the occasion of his acceptance of the Democratic nomination for a fourth term, appearing in LIFE Magazine and triggering a major FBI investigation.
As it turns out, the balding naval officer in the foreground is none other than Howard Bruenn, whose constant presence at FDR's side at the time was supposed to be a secret. After a number of Bruenn's colleagues recognized the cardiologist, surmised he was there to treat presidential heart disease and started talking among themselves about it, J. Edgar Hoover and company were dispatched to "squelch the chatter" so to speak. This, of course, turned out to be only the top layer of many calculated deceptions with respect to FDR's health in 1944 and 1945.
I will post the Neurology paper on the day of its publication.
Posted by Steven Lomazow M.D. at 1:27 PM 9 comments: