1) Release of the paperback of our book in January 2011

3) Publication (approved but exact date pending) of my paper entitled "The Epilepsy of Franklin Delano Roosevelt" in the prestigious journal Neurology.

4) April 9, 2011. My co-author and I will share the podium at the Lahey Clinic in Boston with Dr. Harry Goldsmith for a comprehensive discussion of the health of FDR.

Changing long-standing historical misperceptions is an agonizingly slow process, especially since they go direct against the very powerful desire of the most important historical figure of the twentieth century!

More on the Truth of the Lucy Mercer Affair 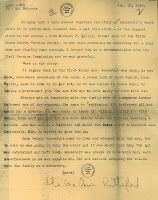 Here is a definitive document obtained from the Trohan papers at the Hoover Library in Iowa.
It pretty much tells it the way it really was. The famous incident of Eleanor finding the letters in the suitcase upon FDR's return from France was not the first time she was confronted with the affair. The great Geoffrey Ward agrees with this version.
Posted by Steven Lomazow M.D. at 11:23 AM 1 comment:

Howard Bruenn and the Lahey Memorandum

On January 30, 1990 Jan Herman the medical historian of the Navy, interviewed Howard Bruenn at his summer home in Maine. Jan has kindly supplied me with the complete transcript of that most interesting encounter. It was, in retrospect, an interesting work of manipulative fiction on the part of Bruenn.

Q: (Dr. Harry) Goldsmith reiterates your 1970 findings, but then steps off from there and talks about the President having cancer. He also brings up the subject of Dr. Lahey.
A: Lahey, at the only meeting we had following my initial examination [in March 1944], said, "This is nothing in my field." and signed himself off.

Q: Lahey really didn't have anything to do with the President's care after that?
Oh, no, not a bit. To my knowledge, he never saw him again. Dr. Paullin, some time after the President died, wanted me to give him my notes, but I didn't give them to him. I was afraid that he might do what Lord Moran [Churchill: Taken From the Diaries of Lord Moran, Houghton Mifflin Co., Boston, 1966] did to Churchill. He went into some pretty personal things and did himself and Mr. Churchill no good. I can tell you Churchill was very fond of his scotch and so on, but that had nothing to do with history.

Q: Back to the cancer, Goldsmith went into this thing about the mysterious pigmentation above the President's left eyebrow. He says there's a photograph that was taken much later in which the pigmentation is missing.
A: That's a photograph error or something. He never had anything wrong with that. He had something on top of his head, something benign. A doctor named Winchell, a surgeon from Mayo, took it off at Bethesda, no problem. (What Bruenn was referring to here was actually neurosurgeon Winchell Craig, who assisted George Webster to remove a benign epidermoid cyst from the back of FDR's head in February 1944. Webster or Craig never removed anything from FDR's face. By this time the lesion above the left eye was long gone, having been cosmetically removed between mid 1940 and late 1941. sl)
In his 1970 paper for Annals of Internal Medicine (aka"The Gospel According to Bruenn), The eminent cardiologist describes Dr. Lahey's impression after examining FDR for the first and only time. Here are Bruenn's handwritten notes, allegedly written at the time , that appear verbatim in his paper:

(click on image to enlarge)
The Lahey memorandum quite clearly states that in July 1944, Lahey informed Admiral McIntire that after again examining the president, he determined that he would not survive a fourth term. McIntire then informed Roosevelt of the prognosis.
The greatest abdominal surgeon of his day quite cryptically opined that a cardiac problem would inevitably return and bring about FDR's demise.
The memorandum was only to be released if Dr. Lahey's reputation subsequently came under criticism for "allowing" FDR to run when terminally ill.
Why then did Bruenn include Lahey's concerns about the abdomen in his 1970 paper, especially when the entire thrust of the article was to promote the notion of a purely cardiovascular death?
The answer is quite clear: Bruenn was quite aware of the memorandum in 1970 and inserted this language to protect Lahey and specifically reduce the probability that the memorandum would be released.
In fact, the intentional deception can be carried even further: The 1970 paper was written in such a manner that if the Lahey Memorandum ever became public, it would consistent with Bruenn's treatise and not expose him as a participant in the cover-up. Clever indeed, and to this day, quite successful in its purpose.
Oh! What a tangled web we weave!
On the face of it, this all might seem quite conspiratorial, yet four years of watching this unfold tells me that it is indeed the case.
Last Wednesday I attended a well prepared and well received lecture at the Lahey Clinic by Dr. David Steinberg, whereupon the eminent director of the ethics returned a facsimile of the memorandum to the clinic. Among others, James Roosevelt Jr., the oldest son of FDR's oldest son, and a major executive in the administration of the Lahey Clinic was in attendance. While it was not the appropriate forum to address the above controversies about the memorandum, it did raise some very valid and interesting questions that will hopefully be dealt with in the near future.
My sincere thanks to Doctors Steinberg and Phil Kousoubris for their hospitality and courtesy.
Posted by Steven Lomazow M.D. at 3:59 AM 2 comments: 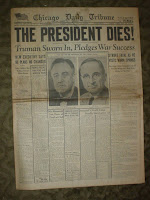 (double click on the article to enlarge it)
The article reports that Howard Gerald Bruenn, a cardiologist, was commissioned into the Navy in late 1942 and was almost constantly with FDR since he was commissioned. It also discusses a "parade of doctors" that had been seeing FDR and that he was told in the Summer of 1944 that he had six months to live (as confirmed in the Lahey memorandum). It also mentions that an operation for cancer was anticipated by Dr. Lahey but he later determined it was "too late." The doctor mentioned who "refused to operate" was William Calhoun Stirling.
This is not at all the picture painted by Bruenn in 1970 of the gallant leader struck "out of the blue" by an unexpected brain hemorrhage. In his paper Bruenn clearly asserts that he saw the FDR for the first time in March 1944.
The widely circulated Tribune laid out a story that was largely accurate the day after FDR died. For the most part- either nobody read it or nobody cared!
In 2010 we have finally brought the true story of FDR's Deadly Secret back to the front pages of America. Perhaps this time it will be believed!
Posted by Steven Lomazow M.D. at 1:45 PM 1 comment: