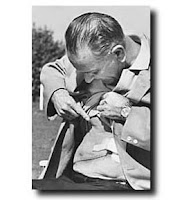 I recently lectured at the New York Military Affairs Symposium on "FDR's Deadly Secret". Below is a link to the podcast of the talk. It may take some ime to download. If you can't access the link, go directly to www.nymas.org and search for the link www.bobrowen.com/nymas/podcasts/Steven%20Lomazow%20M.D%20-%20FDR%27s%20Deadly%20Secret%20160kbps.mp3
Posted by Steven Lomazow M.D. at 4:30 PM 1 comment:

It is now nearly fifteen months since the publication of our book. While some inroads have been made, and will continue to be made, in getting to the reality of FDR's life, the 1970 fairy tale of Howard Bruenn and the concurrent and most influential Roosevelt biography ever written, by James MacGregor Burns, who collaborated with and was taken in by Bruenn hook, line and sinker, continue to permeate the historical mainstream. Until the Bruenn mythology is thoroughly exposed and expunged, it is simply not possible to accurately assess the life, accomplishments and thought processes of the most important president of the twentieth century.
Admittedly, there is no direct proof or "smoking gun", since the powerful ghost of FDR continues to loom largely, but half a decade of intense research continues to reinforce the correctness of our assertions.


To be considered a counterfactual historian is an incredibly difficult position to overcome, especially considering the power and importance of personality that it involves. Ross McIntire and Howard Bruenn were nothing more than the voice, both living and posthumous, of FDR himself, as is now most probably the unified silence of the Roosevelt grandchildren.


It is likely that from prior to his second term and surely prior to his third, that Franklin Roosevelt knew he was doomed to die of recurrent metastatic melanoma. From that time on, the knowledge of his mortality permeated his thought processes. Two hours of each and every day from 1939 on were spent with Dr McIntire (this is well documented in the usher's diary), either receiving medical treatment or masking the melanotic lesion above his left eye. Many of the "vacations" on naval ships were subterfuge for medical treatment. Many of the frequent episodes of "influenza" were not that at all, but rather were the effects of his two cancers and a likely stroke sustained in late 1943, from which he largely recovered but left him with disabling seizures (In this regard I want to thank Dr Joseph Sirven, head of epilepsy at Mayo Clinic, Phoenix, who recently provided key insight in the etiology and dating of FDR's seizures).

As I anxiously anticipate my visit to the Lahey Clinic Boston on April 9th and against great odds await the April 18th announcement of the 2011 Pulitzer prize for biography, I remain confident that eventually the truth will come to light. As I suspected, James Roosevelt will not be in attendance at the Lahey event in Boston. I can understand why and have no desire of putting him an uncomfortable position. If I knew (or even suspected) that my grandfather had a wish that he did not want violated, I would act similarly.
Posted by Steven Lomazow M.D. at 12:16 PM 2 comments:

Last Friday I had the privilege of speaking at the Mayo Clinic, Phoenix. My talk on FDR's epilepsy was well received and my sincere thanks to Dr. Joseph Sirven, Chairman of the Departmant of Neurology and director of the epilepsy division for his wonderful hospitality and enthusiasm.

just click below my picture on the website (may take a few seconds to load). Thanks here to Bob Rowen.

Looking forward with great anticipation to sharing the podium with Harry Goldsmith at the Lahey Clinic in Boston on April 9th.

Happy spring to all. Woke up to a snowstorm this morning!

My Podcast on FDR's Epilepsy

I had the pleasure of doing a podcast on http://www.epilpsy.com/ with Dr. Joseph Sirven, director of the epilepsy unit at Mayo Clinic in Arizona. Here is the link to the podcast: