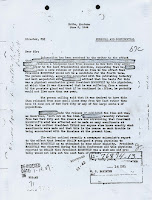 This letter was given to us by Margeritta "Mickey" Allardice, the daughter of William Calhoun Stirling, I've never seen it referred to previously.


Obviously, this is a censored FBI document, written almost two months after FDR's death. The author is special agent W.G. Bannister, a regional FBI director and was sent to Director J. Edgar Hoover. It was probably obtained through a FOIA request but the source is unknown (I will be asking Mickey how she acquired it).


This letter was written about the same time a three part article "The Strange Death of President Roosevelt" appeared in an obscure but credible magazine, News Story. For a pdf of the complete article see: http://www.scribd.com/doc/12902806/News-Story (195 downloads so far!)


The rumors addressed in the third and fourth paragraphs of the letter center around FDR's mental status at Yalta and his prostate cancer and probably arise from the Walter Trohan/William Calhoun Stirling connection that is the source of virtually all of our present understanding of FDR's prostate problems.


The identity of the informant is unknown, though further research into any Montana connection with a New York reporter might provide further insight.


All in all, this is a new, important and interesting document concerning FDR's health. We are happy to bring it to public attention.