What was the Cause of FDR's Malignant Hypertension?

This one may be two technical for non-physicians and was clearly too controversial for the book, but its a line of thinking that has come from many years of research.

I give all the credit here to Dr. Barry Wiener, a brilliant educator and nephrologist at Jersey City Medical Center, whom I had the privilege of working beside for three years. Over the years, we had many conversati0ns around the etiology of a low grade proteinuria (seen repeatedly and consistently from 1939) FDR had, as documented by many surviving reports of urinalyses.

The eureka moment came when I first mentioned to Barry, after countless conversations, that FDR may have undergone radiation therapy for prostate cancer. A light came on and he immediately referrred me to a chapter in a textbook "Acute Renal Failure" edited by Barry M. Brenner and J. Michael Lazarus (W.B. Saunders, 1983) about an entity known as radiation nephritis. see: http://emedicine.medscape.com/article/243766-overview
First described by Luxton in 1952, it documents a clinical course entirely consistent with that of FDR.

So, it is entirely possible (I won't say probable here) that malignant hypertension well documented that FDR had at least from March 1944 on, may have been, in large part, a consequence of the radiation therapy he received for his prostate cancer in 1940 or even before. This, of course, was superimposed upon his relatively mild and intermittent hypertension seen as early as 1933, his 2 pack a day use of tobacco use and a history of childhood nephritis from rheumatic fever.
The whole thing fits like the proverbial glove and raises the question of when the diagnosis of prostate cancer was made and when it began to be treated. Obviously, FDR's physicians could not have known about a condition that was described seven years after his death! While kidney pathology from radiation is decribed in Behrens' 1949 textbook, there is no mention of the clinical course as described in 1952.
We do not believe that it is at all a coincidence that Roosevelt's radiologist, one of the inner circle of his physicians, Charles F. Behrens, was the editor of the first textbook on the effects of radiation on the body, "Atomic Medicine", in 1949.
There is more smoke here. A letter appears at the FDRL (Box 6, McIntire Files) from internist Paul Dickens, another of the inner circle doctors, forwarding a letter from Doctor F.A. Reuter to Ross Mcintire about "John Cash", allegedly the son of a White House policeman, concerning a remarkably extensive and invasive workup for low grade proteinuria (protein in the urine that is normally not seen). 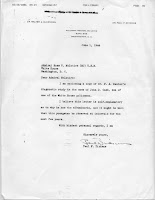 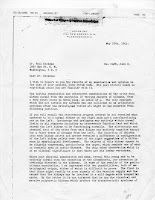 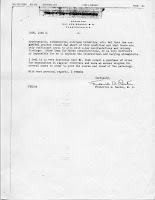 The question arises that, on the face of it, a young man underwent a "million dollar" workup for a benign condition that affected many thousands of children from exposure to rheumatic fever (as had been FDR). It seems like "much ado about nothing" for a child, but it wouldn't have been for the president of the United States.
In fact, our research indicates that there was a White House policeman at the time named John Cash. On the other hand, John Cash is one of the thirty plus known aliases to have been used by FDR and a 1944 laboratory report found in the FDR papers at the FDRL carries this name, as well as documenting a profound (4+) proteinuria (incidentally, never reported by Howard Bruenn despite the fact that he undoubtedly saw it).

The March 10th date is also interesting. This result, over two weeks prior to Bruenn's alleged first exam and just about the time that Ross McIntire decided that FDR needed a vacation in Cuba rather than meeting with Winston Churchill to plan the invasion of Europe, surely would have raised some concern but not a whiff of it appears anywhere.

This is just one of the fascinating and frustrating aspects of the layers of smokescreen laid down to cover FDR's Deadly Secret. More to come!
Posted by Steven Lomazow M.D. at 9:17 AM