On the Tuscaloosa February 1940

These color frames are part of a film made by the US Navy for the President to commemorate his second cruise on the USS Tuscaloosa in February 1940. FDR felt at home on naval vessels and , being away from the press and public, felt it was less necessary to pay undue attention to the appearance of the pigmented lesion above his left eye. The purpose of this "mystery cruise" was ostensably to inspect the defenses ofthe Panama Canal. It is quite possible that this, and other voyages, were venues where he cauld have some"work done" to his lesion. The only staff members on this trip were his constant companion, VADM Ross McIntire, his chief of staff General Edmund "Pa" Watson (seen standing directly behind him), and his naval aide ADM (then Captain) Daniel J. Callahan, who died on the bridge of the USS San Franciso on November 13, 1942 at the battle of Savo Island (near Guadalcanal) and was posthumously awarded the Congressional Medal of Honor. He is seen here boarding the cruiser. The lesion is starkly obvious, in contrast to the shadow (perhaps further attenuated by make-up) seen only ten months later while giving his "Arsenal of Democracy" speech on December 27th. 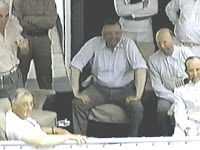 During a performance of the crew Admiral McIntire (second from right) casts a watchful eye on his star patient. Watson is to his left. Callahan is at extreme left. 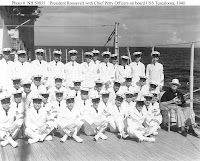 With the chief petty officers. 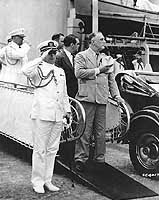 On the left- a carefully staged photo taken from the right (Captain Callahan saluting at left). FDR could not take a single step unassisted.

On the right- photo taken the same day (same suit, same car) from the left showing the lesion 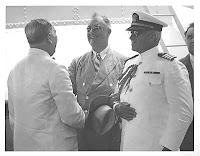 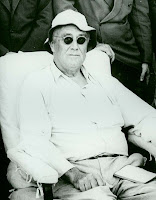 A webpage summarizing the three cruises

At the close of the second cruise, FDR gave a brief speech, preceeded by these comments by Captain Badt:

Introduction by Captain Harry A. Badt, U. S. Navy Commanding Officer, U. S. S. TUSCALOOSA:
"Mr. President, it is always a pleasure to have you on the TUSCALOOSA. We are all sorry to see you leave tomorrow, but we are hoping that you will make another cruise with us soon and the officers and men of the TUSCALOOSA all want to wish you continued good health."