Franklin Roosevelt did not personally deliver his 1945 State of the Union address to congress as had been his custom until 1943 (In 1944, he begged off because of "the flu", perhaps partially true) Instead, on January 6, he transmitted it to congress and spoke to the nation over the radio.

The reason is quite clear. By this time he was incapable of standing anywhere near long enough to give the 15 page, 8,253 word speech standing on the podium of the House of Representatives. He had to marshal his strength for the upcoming inaugural for which he absolutely had to stand to deliver an abbreviated address (the shortest in presidential history).

January 1945 was not the time for FDR to reveal to the world, for the first time, his increasingly debilitated condition. He needed to continue his image of strength for the inauguration, and, even more importantly, for his upcoming trip to Yalta.

Instead, it was decided that a short newreel video would be done, under the most optimal of conditions, to speak to America. Make up artists and lighting specialists were brought in from Hollywood to optimize the appearance of president's wan complexion and cachectic body and the production was made.

The video is divided into three carefully edited excerpts, but there is still much to be seen knowing that from this time FDR was struggling with his vision, most probably from a metastatic brain tumor in the right posterior portion of his brain.

Even before he begins speaking, watch carefully and you will see that he uses his left hand to mark the place on the page from which he is about to speak. Soon afterwards, be begins to use his left hand as a stylus to keep his place. He stumbles over the word "numbers" than accentuates the words "places" and "times" to try to cover his initial hesitation.

In the second excerpt, he again uses his left hand to mark his place and after the phrase "war torn world" then uses his right hand as a marker, crossing it over his left.

In the third excerpt, he abandons all pretense and is essentially reading the text following his left hand along the page.

Here is a color still photo of the speech. 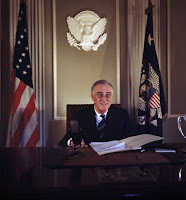 In contrast, here is a video of FDR speaking in October 1944, less than three months prior to the State of the Union video. There are a few minor stumbles, but his hands remain at his side. The contrast is remarkable.

On March 1, 1945 FDR give the worst performance of his life during his speech to congress, deviating from the prepared text, (according to the New York Times, 49 times, we never counted) due to a primarily left sided visual deficit. On April 12, he died of a massive cerebral hemorrhage emanating from the right posterior portion of his brain- the area that controls the left side of vision.