Probably the best way of all to appreciate the disappearance of the pigmented lesion above the left eye of FDR is watching it in videos. Especially between 1936 and 1940, newsreels reveal the starkly obvious lesion, accentuated even more by FDR's habit of raising his eyebrows while speaking. Only because FDR was the most photographed person on earth and the lesion was in an area that could not be hidden can this remarkable video record be created.


Take a look for yourself:

It is just not possible to determine when, and how many times, the lesion was operated upon by Ross McIntire. A few days were needed away from the glare of the public and press for the area to calm down after being surgically manipulated in some fashion. There were many opportunities for this to have happened. Many of the daily visits to the White House doctor's office were likely devoted to treating and soothing the area, which surely must have been chronically inflammed. Much of the "sinus" treatment was probably just another smokescreen necessitated by the deadly secret.

What can easily be seen, though, is by the time of the "Arsenal of Democracy" speech on December 27, 1940, even accounting for the use of make-up (pancake makeup was invented by Max Factor in 1935), the lesion is noticibly lighter. Also, note again, that FDR's hands do not leave his side.

After this, the difference is unmistakable. In all videos from 1941 and forward, the lesion is, at most, a faint shadow of scar tissue.

Amazingly, what had been a prominent facial feature had disappeared without any public notice. Only one record exists that the pathologic potential of the lesion was noticed at all- the January 1940 letter of Reuben Peterson (see the book for details). 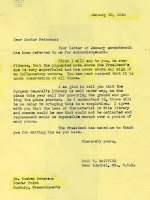 As stated by the eminent dermatologist, the late A. Bernard Ackerman, in our paper in the Archives of Dermatology, there are only too possibilities, based on physical characteristics, that this lesion could be: Solar Lentigo (aka sunspot or senile keratosis) or Melanoma. Even more relevant, while rarely these lesions may spontaneous regress, the natural history of either of them is incompatible with its disappearance over so short a time.

Therefore, within any degree of medical probability, the lesion was intentionally removed. What you have just seen is the unequivocal objective evidence of that removal!