The relationship between FDR and the iconic father of American neurosurgery, Harvey Cushing, came about through the marriage of their children, James and Betsey. Betsey was FDR's favorite daughter-in-law, playing host to Britain's royal family during their visit to Hyde Park in 1939. The marriage lasted between 1930 and 1940, ending in divorce, and produced two children. Betsey Cushing then married John Hay "Jock" Whitney, and became one of America's greatest philanthropists and patron of the arts, leaving an estate reportedly over $700,000,000.
see: http://en.wikipedia.org/wiki/Betsey_Cushing_Roosevelt_Whitney 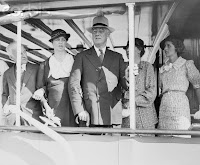 The correspondence between these two giants was documented in this 2001 paper:

Ironically, FDR and Cushing had another connnection. At the outset of FDR's fatal brain hemorrhage on April 12, 1945, Roosevelt's blood pressure soared to 260/150, a phenomenon seen as a consequence of a rapid elevation in intracranial pressure (basically, a reflex effort by the body to maintain blood circulation to the brain). This was first described by Cushing in 1902 and is known as the the Cushing response or Cushing's phenomena.