How Deep was the Cover-up? 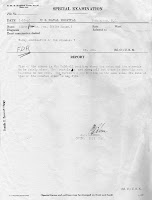 On the face it, a simple x-ray report on an unknown patient, this document tells many stories.

Found in the archives of the Franklin D. Roosevelt library, it is one of the relatively few surviving medical records of the President. Exactly why Ross McIntire decided to separate this one from what must have been countless others is a matter of speculation, but we can make a highly educated guess.

It is dated January 10, 1940. Just about the time a reknowned cancer doctor, Reuben Peterson, sent a friendly letter to FDR mentioning his concerns about the pigmented lesion over his left eye- a wake-up call that it something must be done so that it didn't raise concerns among other, less well-intentioned, observers. Roosevelt was about to attempt what no man had ever done, run for a third term as president, and even the slightest whiff of suspicion that he had a malignant disease would spell an abrupt end to that lofty ambition.

The handwritten annotations and typed interpretion were by Dr. Charles Francis Behrens, the navy's top radiologist. At the time, radiologists performed the dual function of interpreting films and treating patients, mostly with cancer, with radiation therapy. He was at the top of his field in both, authoring many scientific papers and editing the first textbook on the effects of radiation on the body, Atomic Medicine, in 1948. He would also be an integral part of the diagnostic team put together to treat Roosevelt in 1944, as noted by Howard Bruenn in his 1970 paper. Every existing x-ray report of FDR carries Behren's signature. Whatever was really wrong with Roosevelt, Behrens knew. His interpretations were the portal that all others relied on.

The films were taken at the White House and transported to the Naval Hospital in the nearby foggy bottom section of Washington (near the site of the present-day Vietman memorial) by Mcintire's right hand man, George Adam Fox, to be read by Behrens. The text of the interpretation is revealing.

"View of the siuses (sic) in the Caldwell position shows the antra and the ethmoids to be fairly clear. The frontals do not show well but there is possibly some haziness on one side. The turbinates are swollen on the same side. The lateral view of the frontal sinuses is negative."

There is no secretarial signature at the bottom. That, the fact that no patients name appears, the mis-spellings and hand-written annotations indicate that Behrens generated the entire dociument himself. Even with an anonymous patient, it was far too sensitive to be seen by anyone other than Ross McIntire.

The most telling aspect of the report are the words "on one side" and "on the same side". This is most definitely intentional, since leaving out such an essential point of information as the side of the pathology is something that any trained radiologist would never purposefully do. Almost surely, the problematic side was the left one but any written mention of the side of FDR's problem was strictly verboten.

In summary, this fascinating document is more evidence that their was an active cover-up of Roosevelts melanoma as early as January 1940.
Posted by Steven Lomazow M.D. at 4:20 PM