Doctor Roosevelt and his Magnificent Obsessions

As all human beings who are driven and successful, Franklin Roosevelt had a constructively obsessive side to his personality. He was well as known collector. His world class collection if naval models and prints is presently on display in New York City. Obviously, he is also remembered for his stamp collecting, which afforded him the ability to escape from the pressures of his hectic daily life.

After 1921, his obsession turned to rehabilitating himself from polio. Seeking every possible way of returning function to his polio-stricken muscles, he educated himself to the level of the finest physicians of the time. His passion for gaining and spreading knowledge in this area is well documented in his correspondence about polio with others, most notably a remarkable 1924 letter to a South Carolina physician, William Egleston, whose daughter had contracted the disease, and had sent FDR a letter about another of his afflicted patients. (pardon the poor reproduction). 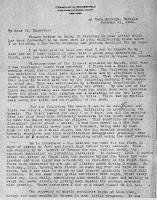 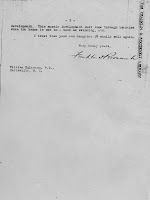 In his compassionate and intimate reply, Doctor Roosevelt offers his advice for treatment and lays out his philosophy about the disease. It is notable for a number of reasons.
At the outset, FDR lays out an extremely (and uncharacteristically) candid account of his own case, recounting the onset of his symptoms and the early erroneous and harmful attempts at massage, followed by a detailed description of his present state of rehabilitation, at a level, not as a patient, but as one physician to another, essentially a consultation in contemporary Physical Medicine and Rehabilitation (a specialty which was yet to be founded), based on the "hundreds of cases" he had studied.
His findings are, for the most part, as valid today as they were then, including a remarkably innovative way of documenting objective improvement, using the level of water he could stand in as measure of the ability of his thigh muscles (quadriceps) to support him. His views on bracing are revolutionary for the time and remain valid today. His feelings about the positive attitude needed to overcome disease is as sound a piece of psychiatric advice that can be offerred then- and now!
In short, this letter demonstrates that, by 1924, Franklin Roosevelt had educated himself to the very highest level, that of the most learned physicians in the field, in the rehabilitation of polio. His passion and obsession extended so far as to risk the bulk of his personal fortune, against the advice of his family and friends, in an effort to turn Warm Springs into a word-class rehabilitation center.
Interestingly, his fourth recommendation "sunlight- all the patient could get" may have had a bearing upon his development of melanoma (a concept, even today debated at the highest level by dematologists).
His discovery of and effusive praise of Dr. William McDonald (see page 30 of the book) is even further testimony to his remarkable knowledge of and intense passion about his disease* Geoffrey Ward's wonderful biography of FDR's early life, "A First Class Temperament" is, by far, the most comprehensive treatment of his physical and mental battle with polio (see for, instance, p. 731).
One important point needs to be made about the above. This type of behavior with respect to his polio flies in the face of Howard Bruenn's later assertion that FDR showed no concern for his physical problems. Nothing could be farther from the truth.
This 1929 letter is an excellent exposition on FDR's attitude about the medical profession. 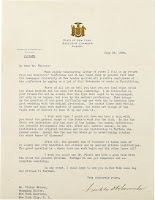 FDR with Dr. McDonald.
In the end, Roosevelt's last great obsession, to succeed where Woodrow Wilson had failed, in cementing his legacy for the future of the world by creating a lasting world peace organization (he would clearly have reveled in what President Obama did last week in chairing a meeting of the security council) is a key to understanding his behavior in 1944- running for a fourth term knowing he would soon die, as well as not putting much consideration at all into his choice for vice-president nor including him in the inner circle of his advisors.
*the callous way he eventually disposed of McDonald when he longer needed him (a la Earl Looker, see page 48 of the book) speaks to another, less meritorius aspect of the FDR personality.
Posted by Steven Lomazow M.D. at 2:20 AM