The Gospel According to Bruenn

Until recently, Howard Bruenn's 1970 paper has been considered the unimpeachable last word about FDR's health. Our analysis in the book documents example after example of inconsistencies, purposeful exclusions and outright falsehoods. Here's the documentation to support one of them.
As you can see in the paper above, the second paragraph of the begins by unequivocally stating "I (Bruenn) first saw President Roosevelt professionally in March 1944".
Here are two letters from 1946 that explode this myth. A correspondence between Ross Mcintire and Howard Bruenn. Bruenn's letter is in response to Mcintire's request for his thoughts to include in his 1946 book "White House Physician" (In fact, the two year period of treatment appears in the book as well). You can also see how well Bruenn understood FDR's driving desire to establish the United Nations. 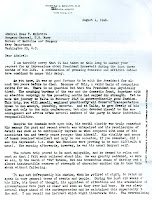 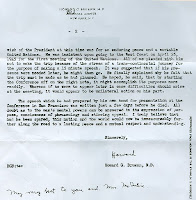 So you can now easily see that the myth of Howard Bruenn's first exam of FDR occurring on March 28th, 1944 only came to after he became the keeper of FDR's deadly secret.
Here is Howard Bruenn's original evaluation of Eleanor Roosevelt in May 11,1943. Shortly after he was stationed at Bethesda and probably about the time he actually first saw FDR. 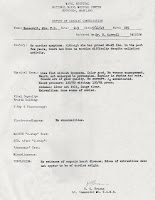 March 28th 1944 was not the first time that Howard Bruenn saw FDR though it was probably about the time that he realized that FDR had deteriorated to the point that if he didn't attend to him on a daily basis and more aggressive treatment undertaken, he would not survive even to live out his third term. Therefore, it necessitated that he come out of the shadows and reveal his presence to others outside the most inner circle of FDR's confidantes who saw FDR on a daily basis.
As to March 28th being the date FDR's "wholly unsuspected" cardiac problems were diagnosed and shortly afterwards necessitating a period of "rest and relaxation", here is the itinerary for the planned trip to Guantanamo dated March 23rd. 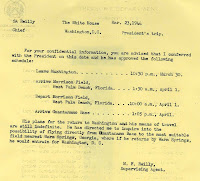 Much more about this particular deception, among many deceptions, is in our book.
Later in the paper , Bruenn describes the regimen outlined for FDR shortly after he allegedly first examined him. Here is a contemprary document pertaining to this regimen: 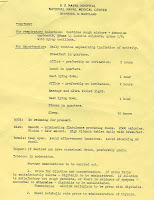 The bulk of the document is quoted verbatim in the paper, with notable exceptions:
The references to the prostate and the left maxillary antrum have been eliminated. It is not difficult to surmise why.
Posted by Steven Lomazow M.D. at 7:10 PM